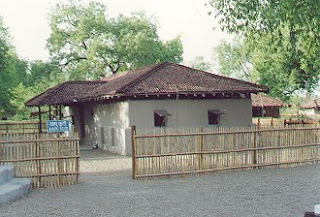 Sewagram Ashram's tryst with India's destiny started on June 16, 1936 when Mohandas Karamchand Gandhi, the father of the nation, settled in Wardha for a few years. 75 years later, the place in Wardha acts as an inspiration and embodiment of hope for lakhs of visitors. The Sewagram Ashram would be celebrating its platinum jubilee and the management has planned mega celebrations to commemorate the event.

The preparations have already started and children from nearby schools and college would be invited for the function. A tree plantation programme would also be held.

Deliberating on the ashram's journey, the septuagenarian said the ashram came up on 10 acres of farmland owned by bizman Jamnalal Bajaj. "It all started from Gandhiji's salt satyagraha from Sabarmati Ashram in Ahmedabad in 1930 when he decided not to go back to the place till India achieves Independence. He was sent behind bars by the British government subsequently. When he came out, he wanted to stay at a place which should be at centre of the country so that he could be accessible to the people."

He added that Bajaj, who was his ardent follower, then offered the piece of land in Sewagram to him. "Bajaj was on cloud nine when Gandhiji accepted his offer. The selection was actually made by Meeraben who came from England and was accompanying the leader. There were no roads at that time."

However, Gandhiji had put a condition that the huts would be constructed with the raw material available in the villages and cost should not exceed Rs 100. Even a board outside Bapu Kuti reads that cottage was built as per Bapu's instructions and it was his wish that all material should be local and expenses shouldn't go beyond Rs 100.

So Adi Niwas was first constructed where all used to live together and this included Gandhiji and wife Kasturba. Then a separate hut for women was built. The Bapu Kuti was actually built for Meeraben but she offered it to the Mahatma.

The trust authorities admit that they were finding it difficult to maintain the Ashram due to a financial crunch. In fact it's the maintenance cost of cottages which is making the matters difficult as they are made up of soil and wood. The soil has to be changed after a certain period. "Additionally, we also have to preserve articles and materials that were being used by Gandhiji," said Gadkari.

The ashram gets donations from some individuals and also some organizations. "We also have our Khadi business. We gain some revenue from Yatri Niwas that was constructed by the government. We also have our farms wherein we grow vegetables," Gadkari, who met Gandhi in 1946, informed.

He added that the ashram receives a footfall of over 3 lakh visitors every year. Many of them stay back but "we are not able to provide them good guides due to the financial crunch". "We have 40 inmates here on an average and we provide some of them free lodging and boarding for their services. We also started an old school in our premises that was launched by Gandhiji. We're making efforts to improve the facility," said Gadkari.
Courtesy: http://m.timesofindia.com/city/nagpur/Sewagram-Ashram-to-celebrate-75th-anniversary-next-month/articleshow/8625699.cms
Posted by Mahatma Gandhi Forum at 9:35 AM No comments: Links to this post