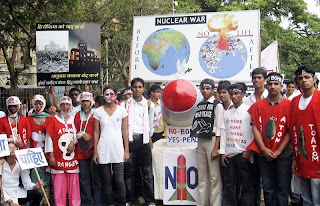 Students carrying the banner depicting the condition of the earth before & after the nuclear war. Peace Rally organized by Bombay Sarvodaya Mandal and NSS Units of SNDT & Mumbai University. About 2000 students from 57 colleges, social activists, and peace-loving citizens in the city participated in the Peace Rally today to commemorate Hiroshima Day. Pledge to work for peace and nuclear-free world was taken by the entire gathering at the end of the Rally.

About 2000 students from 57 colleges, social activists, and peace-loving citizens in the city marched from Azad Maidan to Hutatma Chowk today on Hiroshima Day. Peace march was organized by Bombay Sarvodaya Mandal and NSS Units to mark the anniversary of the devastation of Hiroshima with a deadly atomic attack by America during World War II & to join hands with the people of the world to make a nuclear-free world.
The devastation had such an effect that lakhs were killed in the atom bombing leaving several thousands crippled. The after effects of the bombing and radiation claimed over three lakhs lives over the years.
Peace Rally was lead by the students carrying the banner depicting the condition of the earth before & after the nuclear war. Students from various colleges were also carrying play-cards and banners depicting slogans like “No More Hiroshima”, and “We want bread, education and job; Not bombs”. Peace rally was started from Azad Maidan and concluded at Hutatma Chowk where a Pledge was taken by more than 2000 students to work for peace & a nuclear-free world. Prof. Arun Salunke, NSS Co-ordinator, University of Mumbai, administrated the Pledge.
Poster Exhibition about the devastation and screening of the film ‘A Mother’s Prayer’ on Hiroshima in various colleges of Mumbai were organized before 6th August to aware the students about the devastating effects of nuclear bomb. 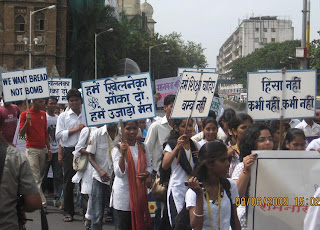 Posted by Mahatma Gandhi Forum at 4:58 PM No comments: Links to this post