Inspired by Gandhi's 'My Experiments with Truth' 360 management students sold 11,000 copies of Gandhi Autobiography within a month

Inspired by Gandhi's 'My Experiments with Truth'
360 management students sold 11,000 copies of Gandhi Autobiography
to get hands-on experience of marketing

Now if you see many people reading Gandhi’s autobiography on roads, trains, buses or any other public places, don’t be surprised. It’s because 360 MBA students from Chetana Institute of Management & Research, Mumbai, sold 11,000 copies of ‘My Experiments with Truth’ in a month of March.
The idea of this project is to get some hands-on experience of sales, operations, finance and systems management. The students have handled all the responsibilities from design of the programme, sponsorship, operations, marketing, permissions and sales themselves.
The students wearing T-shirts with Gandhi’s messages and carry similar bookmarks and stickers sold copies of ‘My Experiments With Truth’ in English, Hindi, Marathi and Gujarati at malls, cinema houses, corporate offices, BMC and other public places across the city.
The project, ‘JAGRUTI’ a part of their academic programme, is being implemented jointly with Bombay Sarvodaya Mandal and NITIE. Prof Aparna Rao was in-charge of this campaign. Earlier, the students had set themselves a target of selling 6,000 copies of the book in a month; they met it within a fortnight. An inter-class competition in reaching out to corporate and others helped them to improve their marketing skills.
Gandhi’s Autobiography is the highest-selling books in the country. This year, up to now, over 3.36 lakh copies of the autobiography in 16 Indian languages were published and sold by Navjivan Trust, Ahmedabad. 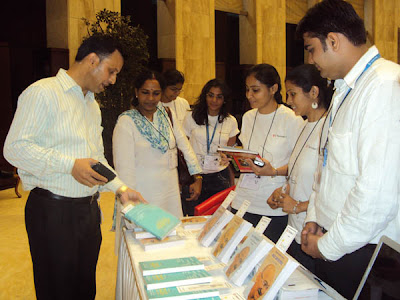 Posted by Mahatma Gandhi Forum at 3:20 PM No comments: Links to this post

Posted by Mahatma Gandhi Forum at 12:44 PM No comments: Links to this post

('Faiz-a-Faiz' editorial from of the Pakistan Times date February 02, 1948.)
The British tradition of announcing the death of a king is "The king is dead, long live the king!"Nearly 25 years ago, Mahatama Gandhi writing a moving editorial on the late C.R Das in his exquisite English captioned it as "Deshbandhu is dead, long live Deshbandhu!" If we have chosen such a title for our humble tribute to Gandhiji, it is because we are convinced, more than ever before that very few indeed have lived in this degenerate century who could lay greater claim to immortality than this true servant of humanity and champion of downtrodden. An agonizing 48 hours at the time of writing this article, have passed since Mahatama Gandhi left this mortal soil. The first impact of the shock is slowly spending itself out, and through the murky mist of mourning and grief a faint light of optimistic expectation that Gandhiji has not died in vain, is glowing. Maybe it is premature to draw such a conclusion now in terms of net result, but judging by the fact that the tragedy has profoundly stirred the world's conscience, we may be forgiven if we lay store by the innate goodness of man. At least we can tell at the top of our voice suspicious friends in India that the passing away of Gandhiji is as grievous a blow to Pakistan as it is to India. We have observed distressed looks, seen moistened eyes and heard faltering voices in this vast sprawling city of Lahore to a degree to be seen to be believed. We have also seen spontaneous manifestations of grief on the part of our fellow...
Read on: http://www.viewpointonline.net/faiz-on-gandhi.html
Posted by Mahatma Gandhi Forum at 1:02 PM No comments: Links to this post